BE TRANSPORTED BY “OUR COUNTRY’S GOOD” AT UCONN 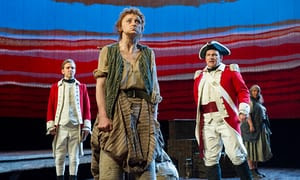 Transport yourself back centuries and over thousands of miles to the 1780’s to a colony for prisoners in Australia where a ship form England has just landed.  Are they there to be punished, for crimes like stealing food or a candlestick, or to seek redemption and a chance at humanity?  The officers in charge are of a mixed vote as to their fate.  You will quickly become engrossed in their precarious situation thanks to an absorbing drama penned by Timberlake Wertenbaker, presented by the Connecticut Repertory Theatre until Sunday, December 10.  The Nafe Katter Theatre on the campus of the University of Connecticut will welcome this straggle of convicts and the men who hold their life or death in their hands.

This Tony Award nominated and Olivier Award winning drama pits these two forces against each other, the helpless men and women who have been convicted of crimes many of them never committed and the army of Royal Marines who are duty bound to make them pay. This talented cast takes double roles, and even a few three positions, as they don officer’s coats, wigs and shoes to play officers and go bare foot as the accused.

In an experiment to discover if there is a chance for rehabilitation by these prisoners, Second Lieutenant Ralph Clark, a hard working and determined Zack Dictakis, resolves to have the convicts in his charge put on a play, a theatrical event to test if performing that feat will give them a positive outlook on their time under lock and key.  Will it stop them from trying to escape?  Will it encourage them to develop as human beings?  Is it even possible for them to learn their lines and execute a show?

With the sounds of whip lashings in the background and the shadows of a noose overhead, Clark strives, against all odds, to accomplish this
nearly impossible feat.  His fellow officers are not supportive of his mission, and some like Major Ross, a mean spirited James Jelkin, actively oppose the play acting. Connecticut Rep’s Artistic Director Michael Bradford puts on his directing cap to lead the procession to the drama’s hopeful opening night.  The hard working cast includes Nick Nudler, Coleman Churchill, Valerie Badjan, Ademide Akintilo, Tabatha Gayle, Emma Mathieu, Jacob Harris Wright, Braley Degenhardt, Gillian Rae Pardi and Matthew Antoci.

Will Clark achieve the impossible?  You’ll have to attend “Our Country’s Good” to find out for yourself.
Posted by Bonnie K. Goldberg at 7:32 AM