DARE TO CLIMB "THE 39 STEPS” IN IVORYTON 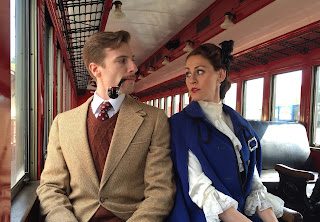 Think of a game of CLUE that has run amok. Think of a humorous homage to the great film maker Alfred Hitchcock.  Think a spy film with secret agents of decidedly German ancestry.  Think practically summer entertainment with a sense of humor and a special spoof in the making.  All these clues spell out “The 39 Steps” and the Ivoryton Playhouse can’t wait for you to come, until Sunday, June 19, to solve the comical adventurous game afoot.
This fast paced suspenseful and silly slapstick ride is an adaptation by Patrick Barlow, based on an original concept by Nobby Dimon and Simon Corble, from the novel by John Buchan and the 1935 movie of the same name.  Clearly Alfred Hitchcock would have gotten a hoot from the clever doings of the four stars who play a whole mine field of characters, donning wigs and hats, aprons and uniforms, leaping off bridges and trains, as the grand pursuit unfolds.

There's an old saying "Be careful what you wish for" so when Richard Hannay, a resourceful and resiilent Dan Fenaughty, complains one day in his London apartment in 1935 that he is bored, what happens next sends him fleeing for his life, accused of murder.  Not so bored any more, eh Richard.
When he attends a performance at the London Palladium, he triggers a series of episodes that begin with a German damsel in distress, Annabella (Larissa Klinger) being murdered in his bed.  Before she dies, she warns Hannay that there is a dastardly plot being brewed to smuggle documents out of the country that will lead to disaster for England.  She also cautions him to beware of a man with part of his little finger missing.
Soon Hannay is jumping on and off trains, running from spies, hiding out on farms and in hotels, a fugitive from justice, giving speeches in double talk for unknown politicians and falling in love with Pamela (again, Larissa Klinger), one of his chief accusers.  A versatile fleet of only two, Jonathan Brody and David Edwards, play a plethora of roles from milkman to mothers, motormen to Mr. Memory, adding spice to a veritable stew of characters.  Erik Bloomquist directs this merry and mysterious romp in Alfred Hitchcock Land with aplomb.
For tickets ($50, seniors $45, students $22, children $17), call the Ivoryton Playhouse, 103 Main Street, Ivoryton  at 860-767-7318 or online at www.ivorytonplayhouse.org.  Performances are Wednesday and Sunday at 2 p.m., Wednesday and Thursday at 7:30 p.m. and Friday and Saturday at 8 p.m.

Come discover for yourself how biscuits and bagpipes, haddock and handcuffs, underwear salesmen and undercover agents, play a significant role in this whistle-while-you-work theatrical tour de force event. Be sure to have your ears tuned to pick up all the references to Hitchcock hits sprinkled liberally throughout this wild and wooly whodunit.