COME "PLAY WITH YOUR FOOD" FOR GREAT THEATRICAL FUN 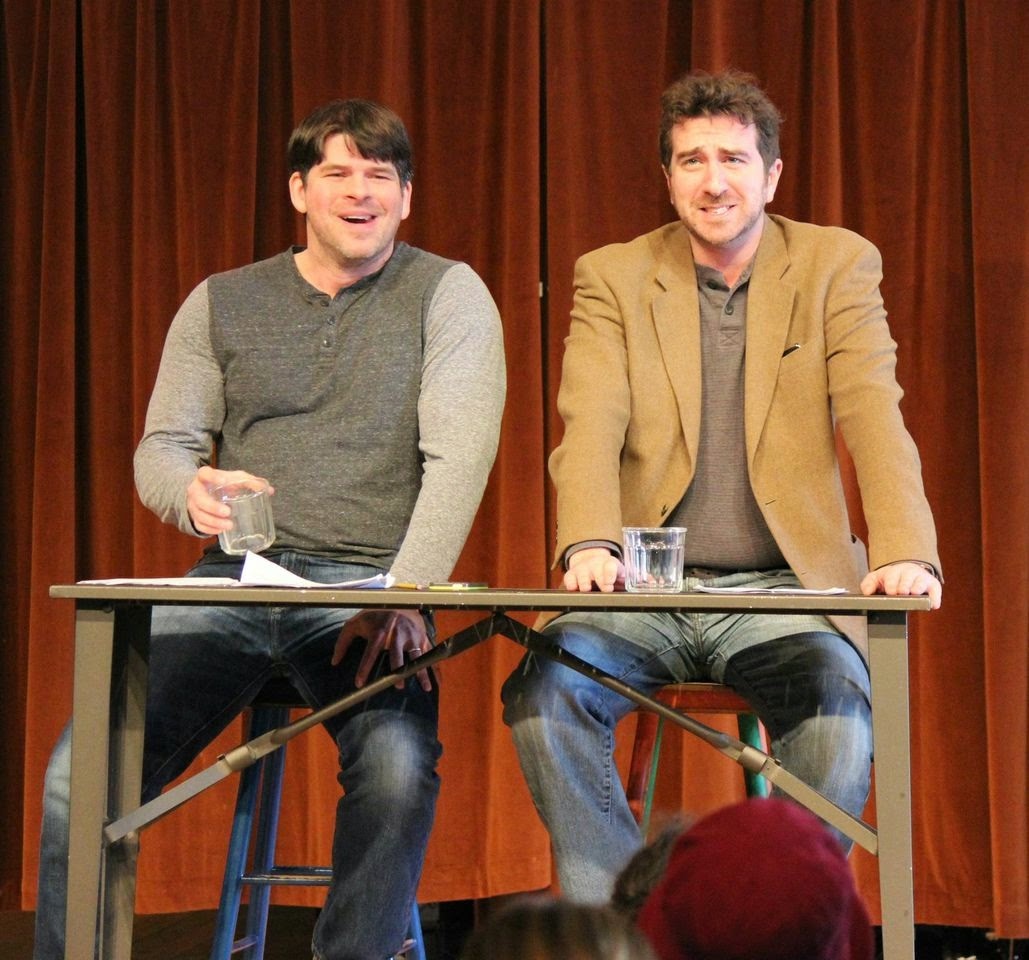 
As a child, your mother must have told you time and time again, "don't play with your food."  As an adult, however, the message is just the reverse.  You're advised and encouraged to "Play With Your Food," especially when it involves a delightful afternoon of theater with lunch, culminating in an informative conversation with the cast of actors, the director and, occasionally, even the playwright.

The fun afternoon begins at noon and ends promptly at 1:30 p.m., starting with a buffet lunch.  The one I recently attended had a distinctly Oriental flavor and optional chop sticks, courtesy of Westport's Matsu Sushi, 33 Jessup Road, and coffee by Starbuck's.  With plenty of time to chat with friends or make new acquaintances, part two of the trifecta, involves a trio of vignettes and excerpts from contemporary playwrights.  In this case, the offerings were "Her Heart," by John Cariani from his comic play "Almost, Maine," performed by Cindy Hannah as Glory and Jim Schilling as East.  These two strangers meet under the Northern Lights and East, a repair man, attempts to fix what is broken in Glory.

"Mandate" by Kelly Younger introduces us to two men, Christopher Wilkes' Drew  and Jeremy Funke's Marc who have been "set up" by their wives in a weirdly sweet attempt for some significant male bonding.   Completing the program is an excerpt from Neil Simon's autobiographical "Broadway Bound" where a mom, Kate Katcher, reveals some secrets straight from her heart to her caring son, Eugene, played by Jeremy Funke.  The entertaining afternoon concludes with a chance to converse with all the participants and have your burning questions addressed.

"Play With Your Food," under the talented direction of Carole Schweid, offers these staged readings at three locations:  in Westport at Toquet Hall, 58 Post Road East, in Greenwich at the Greenwich Arts Council, 299 Greenwich Avenue and in Fairfield at the Fairfield Theatre Company, 70 Sanford Street. Her goal is to provide "the right mix of plays that are intelligent, thought provoking and humorous, with themes that an audience can relate to and connect with."
Since she established this theater endeavor, with Nancy Diamond, over 100 one act plays have been presented, "all little gems, packed with a punch, brilliant little pieces of theater."  "Play With Your Food" is available for libraries, personal occasions, corporations and fundraisers.

For tickets ($45), call  203-293-8729 or online at www.jibproductions.org.  Each offering is centered around a theme, in this case romance, just in time for Valentine's Day. The need for relationships and connections and intimacy are all explored. The dates for March and April are Westport March 3, 4, and 5 and March 31, April 1 and 2, Tuesdays, Wednesdays and Thursdays, in Fairfield on Tuesdays, March 10 and April 7 and in Greenwich on Wednesdays and Thursdays, March 11 and 12 and April 8 and 9. Make your reservations soon as they sell out quickly.

Come "Play With Your Food."  It's okay.  You have your mother's permission.  Enjoy Fairfield County's most popular and entertaining series for award-winning theater, fine acting, lunch by enticing local eateries and a chance to chat with all the players.  Who could ask for anything more?
Posted by Bonnie K. Goldberg at 10:15 AM