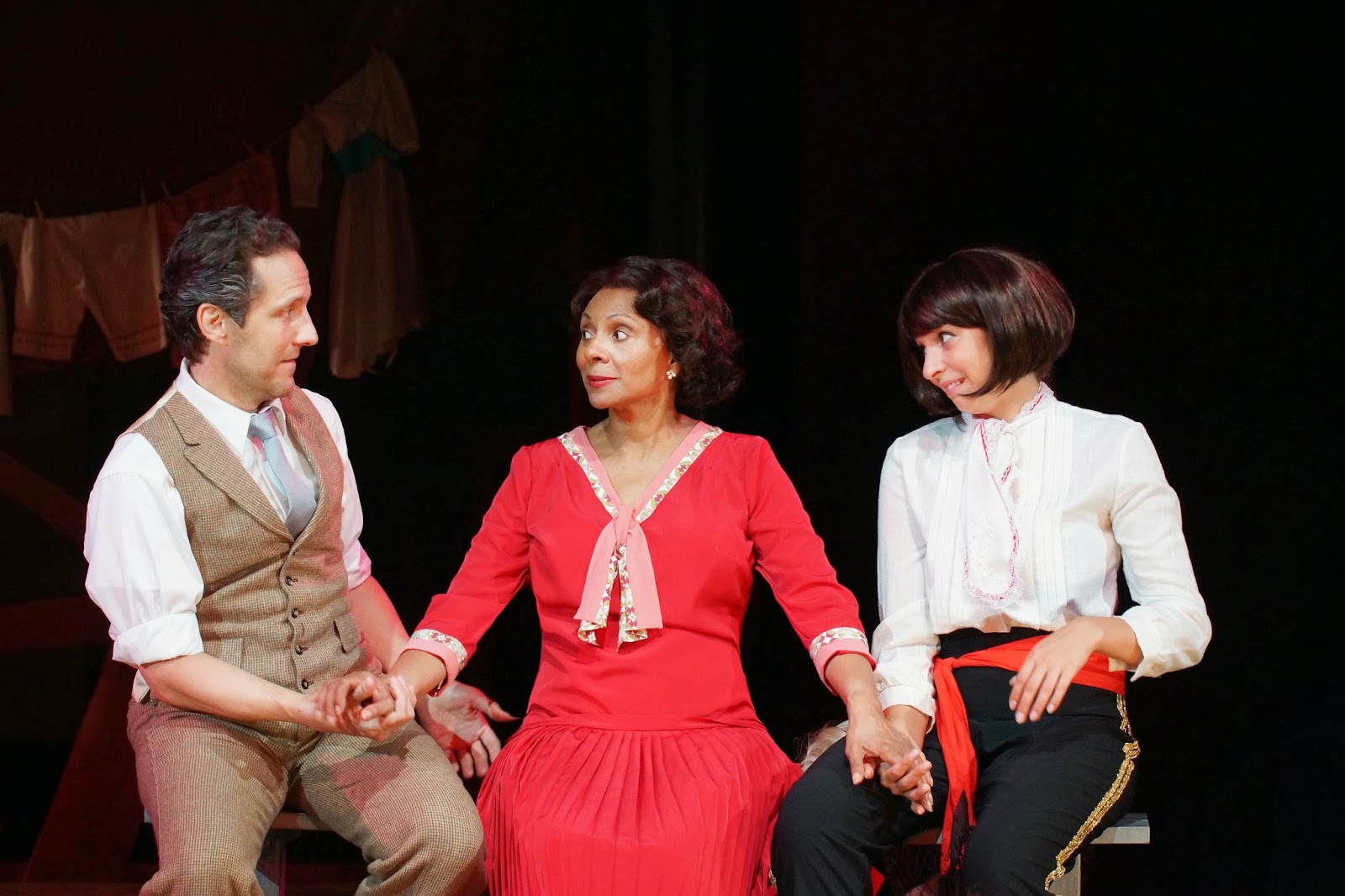 HERBIE, ROSE AND LOUISE IN "GYPSY"

As stage mothers go, Mama Rose is the definitive puppet mistress of them all, focused and fixated on making one of her two daughters a star with a capital S.  She is equally revered and vilified for her powerful controlling role as the pushy and manipulative mother who refuses to take no for an answer.  She knows best and her opinion  is inviolate.

Until Sunday, June 20, the Connecticut Repertory Theatre at the Harriet Jorgensen Theatre on the campus of the University of Connecticut will be presenting, in fine fiddle and form, the musical fable "Gypsy" with book by Arthur Laurents, music by Jules Styne and lyrics by Stephen Sondheim, suggested by the memoirs of Gypsy Rose Lee.

Miss Leslie Uggams envelops the role of Mama Rose and makes it her own as she steamrolls her two little girls, baby June (Annie Totis) and Louise (Madison Young), into the star pattern born of her own dreams. From Uncle Jocko's (Stephen Hayes) Kiddie Show to a top billing on the Orpheum Circuit, wherever vaudeville was king, Rose pushed and manipulated her girls into the spotlight.  She saw baby June, now a grown up dimpled blonde Alanna Saunders, as her ticket to success and she used Louise, an accommodating Amandina Altomare, to help her claw her way to the top.  Along the rocky road, Rose latches on to good- natured Herbie, Scott Ripley, who pledges his help to be their agent because he loves Rose and all children.

When Rose's dad, a long suffering Michael James Leslie, refuses to give her any more money to fund her pie-in-the-sky schemes of stardom, Rose does not hesitate to find other means to make her way.  Wonderful songs like "Some People," "Small World," "You'll Never Get Away From Me," "If Momma Was Married," "Everything's Coming Up Roses," "Together Wherever We Go" and "Rose's Turn" help propel the plot in a most delightful way.

When Dainty June finally rebels, Rose doesn't hesitate for a moment to fasten her hopes on Louise to now be her rocket to the moon.  Louise's star turn takes an unexpected curve, especially when she meets and gets inspired by a trio of strippers, Mazeppa (Ariana Shore), Electra (Cassandra Dupler) and
Tessie Tura (MacKenzie Leigh Friedmann) who make the tune "You Gotta Get a Gimmick" one of the highlights of the show.  As directed by Vincent J. Cardinal, "Gypsy" is a pure pleasure.

Come gather ye rosebuds while ye may as Miss Leslie Uggams and a talented cast spread rose petals of delight all the way to the doors of the air conditioned Jorgensen Theatre.
Posted by Bonnie K. Goldberg at 1:17 PM