MERRIMENT AND MURDER ON WOOSTER STREET 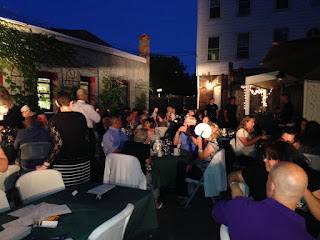 CONSIGLIO'S ON THE PATIO FOR A MEAL AND MURDER

How do merriment and murder, delicious dining and devious detecting combine in one evening of super fun?  Easy, if it’s the sleuthing party at Consiglio’s grand restaurant on Wooster Street in New Haven known for fine Italian dining experiences for 77 years as well as the comic and ingenious murder mysteries devised and hosted by improvisational entertainer Michael Sayers.


All summer long, outdoors on the garden patio, on Friday nights July 24, August 7 and 21, as well as fall dates September 11, October 16, November 13, December 11, 17 and New Year’s Eve, Sayers is conjuring up evenings combining great dining with audience participatory mystery excursions.  As you delight in a meal of your choice, you get to be an amateur Sherlock Holmes or Miss Marple.Select from a choice of five appetizers like fried calamari, succulent and crispy and ready to be dipped in a zesty marinara sauce, or nine entrees like filet of sole florentine on a bed of tender  baby spinach, awash in a savory sauce of white wine, lemon and garlic and two desserts like Godiva Tiramisu, created when you soak Godiva liquor over lady fingers and stuff with mascarpone cream and espresso. While feasting, a troupe of actors with mingle and schmooze at your table dropping clues about their character and how they interact with the other players, fair and foul.  When the murder occurs, and it definitely will, you are right on the scene with or without your magnifying glass to deduce and deduct all the evidence.First up on Friday, Juy 24, you’re invited to partake of “Murder on Auction” when a lost painting by a legendary comedian ‘Red’ Shecky goes to bid to pay off his gambling debts.  Where’s the honor in that?  Apparently, Shecky isn’t a much better artist than he is a performer.On Friday, August 7, the game is politics and not a typical fundraiser, but an extraordinary ‘funraiser.’  The campaign chest is empty and needs filling and the usual suspects are all under the grilling light of truth or dare when a murder is uncovered.Register for a semester of college on Friday, August 21 for “The Sunny Day in ‘Staven.”  Unpack your bags and prepare to move into the dorms at ‘Staven University where nerves and tensions are climbing higher than the clock tower.  Watch out for a well known personality who is slated to appear, without a red carpet invitation, to enroll her precious offspring for class.  This pun on East Haven is destined to end in a collegiate crime scene.For reservations, call 203-865-4489.  Tickets are $55 for dinner and the show, while drinks, tax and tip are extra,  Doors open at 6 p.m. and the show at 7 p.m., outdoors on the garden patio if weather permits.  Reserve early as shows sell out.

For Michael Sayers, chief creator and master of ceremonies, “The joy of what I”m doing has changed my life.  I’ve never had so much fun as being at Consiglio’s, acting out one of my five dozen plus mysteries.  It was especially great when Marie, a revered second generation grandmother of the now four family generations, who is at least 22 plus “shipping and handling.” “pinched my cheek and told me I was funny.  that was back in 2011 when I took part in the hysterical “Garlic the Musical” by Liz Fuller. We’ve been on a great roll ever since then.”Come take part in the festivities and frolic and fine food as Consiglio’s adds mystery and murder to its menu. Mange!
Posted by Bonnie K. Goldberg at 7:54 AM