“GARLIC THE MUSICAL:” EVEN THE NAME SOUNDS FUNNY AND FASCINATING 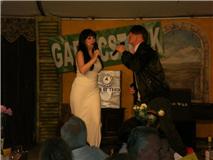 A close cousin to the onion and leek, garlic is a spice with six thousand years of history, as a seasoning for cooking and as a medicinal healer to prevent everything from the common cold to colon cancer.  You would not have to travel far to attend the Connecticut Garlic and Harvest Festival in Bethlehem, October 8 and 9, to enjoy such treats as garlic sausage and garlic ice cream.
Even closer to home and ready to enjoy right this minute, weekends until early September, is “Garlic the Musical,” on the patio of Consiglio’s Restaurant, 165 Wooster Street, in New Haven, arguably one of the prettiest streets in the city  A fine dining establishment for over seven decades, Consiglio’s has added an intriguing new item to their extensive menu for the last three summers:  outdoor garden dinner theater Friday and Saturday evenings at 6 p.m. and late Sunday afternoons at 4 p.m.
The fun starts long before the actors enter stage left.  Just sitting under the festive tent at small tables, next to flower boxes of pink and white petunias, with intoxicating Italian smells from the nearby kitchen get you in the mood.  Once you start munching the hot and crusty garlic bread, you know you’ve come to the right place.
The menu consists of Caesar salad, penne a la vodka and chicken Florentine on a bed of fresh spinach. All yummy.  While you dine, you might find yourself “tapped” to be part of the show, with a blonde wig, a bikini apron or a garlic hat.  Don’t be shy.  Enter into the silliness.
You’ve heard of Woodstock, but long before that was Garlicstock.  Sit back, relax and sing along as a budding concert promoter named Tony Bob (Michael G. Sayers) decides he is abandoning his career as a hairdresser, now that’s he has flunked shampoo.  He organizes a three day musical “festivale” in a barn in the middle of nowhere on a garlic farm in Calabria, Italy and you’re invited.
Luckily he has the help of his guardian angel (Gary Cavello) who looks suspiciously like the Italiano Vampire who is plaguing the neighborhood and trying to seduce Tony Bob’s delectable sister Diana (Laura Papallo).  Don’t be surprised if the ghost of Buddy Holly and Sonny Bono check-in as well as Cher and Judy Garland with great songs of the 50’s and 60’s, orchestrated electronically by PJ Letersky.  Gordon Costello directs this wonderfully wacky “spaghetti musical” penned by Elizabeth Fuller.
For reservations ($65), call Consiglio’s Restaurant, 165 Wooster Street, New Haven at 203-865-4489 or online at www.consiglios.com.  Don’t worry, there is a delicious dessert of Godiva tiramisu between acts.
Watch how a garlic infestation is averted, a damsel in distress is rescued and a vampire is sent packing back to Transylvania.